TAKE A GOOD LOOK AT THIS BEHAVIOUR! 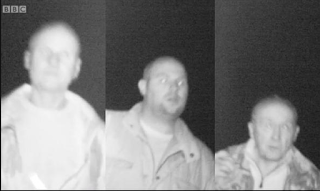 These vile sub humans have been going onto land at night, and stealing things and thus disturbing the archaeological (I finally learnt how to spell it proppa) evidence that may have lain there!

And look!  Not one metal detectorist wants to dob this lot in.  I don't care that nighthawks are secretive types, and metal detectorists probably don't know who they are anyway.  I'm not interested in any of that twaddle!  Stick them all in the same boat, I say and then sink it using one of Nigel Swifts immortal buttcheeks.

Who cares if Metal detectors are also against Nighthawking?  We don't want to know the truth.  It's easier to share our bigoted, hypocritical vision, and attempt to swerve the public from the actual truth of the matter!

Since I have infact been found out to actually BE Nigel swift, and also run the Heritage Action blog, I am disgusted to find that someone has spotted me hiding in the bushes...

I was only observing the Archaeological process!  Honestly!  I had my trousers on and everything!

Anyway, how dare you!  Do you know who I am? I can sit in any bush I like.

Especially those really warm ones outside schools.

Merry Christmas to my fellow archealoologists! 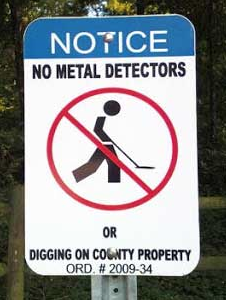 And of course, a happy New year...

...Unless you're a Metal Detectorist.  You can stay out in the cold, whilst I quaf Mince pies, rubbing myself with French odour that Mrs Barford will no doubt buy me again.  Along with socks and pants that have a picture of metal detecting with a big cross through it.  I love them.

Stay out there in the cold, like the disgusting creatures you are.  There will be NO festive cheer for you sad, pathetic losers.  How dare you!

Take a good look at this behavior!  It's people like these who are a burden on the taxpayers pocket.  Not that I pay tax.  That's why I moved to Poland.  Why should I pay tax!?  I'm rich!  Tax is for the underclass.  Stay out there in the cold, in the swill like the pigs you are!

Pass me a towel, Nigel.  I'm getting rather moist.

PAUL BARFORD IS NOT A FASCIST!

And neither is Nigel Swift!

(Please don't mention the fact we are actually the same person)


Some foolish creature, probably a dirty un-educated metal detectorist, has said this on one of my other blogs:

This article is written under the paradigm of intellectual superiority or elevated legitimacy of officialdom over the freedom of people to collect artefacts from the land in which they live. Your attitude is by definition a fascist approach to the views and freedoms of others and I’m sure would be laughable to the average Celt/Saxon/Briton although you might have enjoyed support from a few Romans – Caligula, Nero or similar egomaniac!

Take a good look at this behaviour, as this is what the British public are wasting their money on! Foolhardy opinion such as this bucket of tripe!  How dare you!  Do you know who I am?!  I am PAUL BARFORD, ARCHHCHCHELLLGY MAN!  My sidekick NIGEL SWIFT will not be spoken to like this, either!

If you had any understanding in that tiny pellet of a brain you have, then you may eventually come to the conclusion that, we are the educated ones.  Therefore, we know best.  It's not a matter of Fascism, it's a matter of superiority through education.  Knowledge (Google) is power, and we hold ALL the power, Sonny!

I know, I know, you are going to mention the fact that I keep on failing that damned Arcchcllyyggyl degree, but I am educated in other areas.  My O level in home economics alone is enough to crush your puny knowledge.  Mummy was very proud of lil Pauly when I got that.  Oh, and Google of course. Love Google.

The conclusion is this:  Sit down, shut up and listen to our correct opinion.  Fascism?  You don't know the meaning of the word!

How dare he!  I'll give him a bunch of fives!

I have permission from my local council to detect on the pasture I mention, and should I find anything that needs to be recorded I will contact my Finds Liaison Officer accordingly.

People like you like to tar all detectorists with the same brush whilst conveniently ignoring how many wondrous items now reside in museums thanks to metal detectorists. 99% of drivers obey the Highway Code, should we ban cars because 1% do not?

Pointless I know trying to ask someone like you to show any perspective. Give my regards to Sir Tony Robinson.

I tried so hard to flit around his answers here.  I'm the best at that.  Take a good look at this behaviour, because even though it might appear that Beaubrummell has got me hook, line and sinker here, I thought I'd break out the big guns.

Now, pay attention.  I know that maybe hard for someone with an intellect as low as yourself, but this is how it works.  I bring in my alias, and bully him with it, asking questions that could potentially get him in trouble, if I word them 'right'.  I do that a lot, you see.  I ask someone a question, and then take that information and spin it, so it looks like they said something else!

Now, if you look at the conversation, it looks like I won, which of course, is the most important thing. My Alias did its job right, and my ego is ensured.  Beaubrummell has decided to back down (or not put up with my devious shit) and Arceheheleogy man has defeated his foe once more!

And don't forget, people.  You must, MUST blame the PAS for everything at the end.  Most important.

I DEMAND a explanation!  *stamps feet*

This is disgusting behaviour!  Do they not know who I am!?  I Know Donna Yates and Nigel Swift!  I'll have them all burnt for treason for this!

When I send an email, I absolutely deem myself important enough to warrant a immediate response.  Are they too stupid to realise this truth?  The FLOS (Finds Liaison officers) haven't responded to my mails for days now.

Take a good look at this behaviour!  For this is what the public are wasting our (Not mine - I live in Poland) money on.
at 03:42 No comments:

It's long been known that I love to create multiple aliases online.  This gives me the absolute opportunity to dish out Archeo-punishment in multiple places, at multiple times!  I'm a man one man army, me, and I told you that you should keep an eye on Archeology man, didn't I?  It's not my fault that you don't have the intelligence to understand my simple commands.

However, it seems that someone has clocked onto the fact that Nigel Swift of Heritage action, and I are in actual fact the same person.  Damn.  There's no way I can get out of this one, either.  It's watertight.

I'm going to have to give Donna yates a ring I think.  She'll know what to do.  She's the Queen of multiple identities.

Some of you may think it's cowardly that I create dozens of identities, create blogs, and spy on forums!  Pah!  We wouldn't have won our wars without spies!  Take a good look at this behaviour, and you'll understand that I had no choice.  This is MY empire.  The Barford empire.

My coat of arms will have me digging a corpse to be gawked at, whilst Yates fondles my testicles.  Infact, I'm going to have to do a Barford just thinking about it! 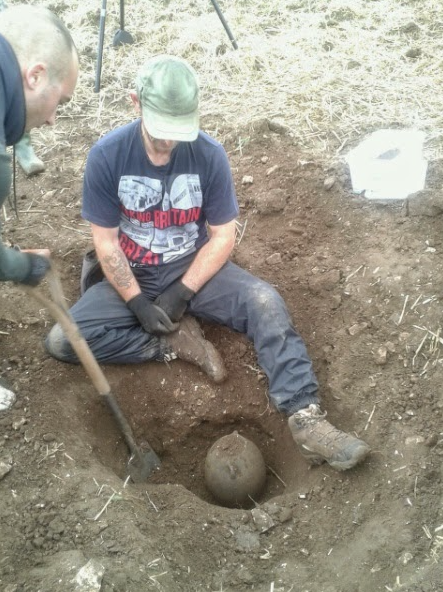 Take a good look at this behaviour!

When I first saw this picture, I thought the pot of coins was in actual fact a skull, and I nearly did a Barford all over the screen there and then.  To my dismay, it was only a hoard of coins...

It's times like these, that we need Archeology man to swoop in, and point the stick of justice, and save this piece of history from the cretins that....saved it?

I don't care that we wouldn't have known about this if they hadn't found it!  It's not fair!  I didn't fail my PHD in Archeologgoy 21 times just for these dumb-witted fools to come in and find much more history and heritage than I EVER have in my life!  IT'S NOT FAIR!  I don't CARE they contacted the FLO!

Mark my words, tekkies.....Archeology man WILL have his revenge...!

I'm all wound up now. I need to find that picture of Nigel Swift and Donna Yates wresting around newly dug skeletons.  Crack out the tissues.  This ones going to be in anger.

When is it ok to dig the dead from graves?

I had a very strange and annoying dream last night.

A ghost came to me, and asked me the question 'When is it OK to dig the dead from their graves?'

I pointed out to the unintelligent being, that Archeology comes before absolutely everything!  The idiot! What will the little kiddies have to gawp at in the museums, if us heroes of the earth don't rip these people from their graves?

The idiot then went onto say:

'But these people were placed here with respect and love - this is never ok.'

What absolute balderdash!  Foolish dream!  Love!?  Never heard of it!  Resepct!?  Who cares!  THE most important thing is what WE can learn about history from these sleeping bags of nothing.  Who cares that they were buried with respect?  They're not here anymore, and WE are.

I didn't study for that Archealllly degree for nothing, you know!  This stupid ghost wants me to reconsider all my efforts, just because of decency and respect!?  Utter trash!

Take a good look at this behaviour, for it is dreams like this that will become the ironic nail in the coffin of our beautiful art.

Down with the underclass!


How dare these Chav creatures from the tower blocks descend on their metal detectors like witches on brooms, and find more relevant history than I have ever found!  HOW DARE THEY! I didn't (try to x 10) complete that PHD for nothing you know!

I had a brilliant idea whilst sitting here scoffing quails eggs in my Polish mansion of lesser tax.  We should just round them up like the good 'ol boys did in the good 'ol days on the fox hunts back in 'ol Blighty.

Ah, good times.  We'd murder a few foxes, and get back home in time to scoff some crumpets, and jam, before heading out for a good 'ol game of naked leapfrog with the local church fraternity, and all their friends.  Never seen so many adults wanting to play leapfrog, though.

Anyway!  Back to the chavvy, disgusting metal detecting wielding scum that blight our countryside today.  How dare they!  We must get on our horses, and hunt them down like wild foxes!  We'll burn the metal detectors, and they'll see the fire for miles!

Take a good look at this behaviour, as these are the very people that are wasting the tax payers money, on the PAS and its associates.  Of course, my fellow upper-class chums won't be paying our tax for now.  Why should we?  WE are the educated ones, after all...

Me, David (Fu) Knell, Nigel Swift and Donna Yates.  What a team!

Baggsy on the horse behind Donna Yates.